“And the asana is really not the yoga. It is the residue the asana leaves in our minds and bodies and hearts that is the yoga.”
– Judith Hanson Lasater

Asana is a word you’ll hear at nearly every yoga studio on the planet. The suffix of most Sanskrit names for poses, it’s often hidden within a much longer and complicated instruction. Savasana, Uttanasana, Bhujangasana. See it now?

In today’s yoga culture, we use asana to refer to the practice of moving through postures or poses. The literal translation of asana is ‘seat,’ but you probably already knew that because of the old ‘get off your asana’ joke.

The earliest Yoga texts only really offer one pose to practice and that is a comfortable seated posture. Lore states that yoga asana was originally developed as a way for monks to train their bodies to endure long, intense sitting meditation sessions.

Because asana is just one of the eight total ‘limbs’ or aspects of Yoga. The first, most basic limb asks that we practice Yama. This concerns itself with how we act in the world. Do we treat others well? Are we living with integrity?

The eighth and final limb is Samadhi, which a self transcendent ecstasy. You could think of the eight limbs as being a ladder of sorts. We put effort and practice into each rung, further preparing ourselves to reach for the next.

Asana falls fairly low on the continuum. It is the third limb of yoga, right after cultivating self discipline (which assists in our asana practice) and before Pranayama or breath work (which prepares us for meditation). We often incorporate pranayama within our practice at the studio, marrying these two integral pieces of Yoga.

What asana does is prepare us for our next reaches into the fullness of Yoga, which is really the fullness of self with an eye toward the transcendent. Holding a demanding physical pose while maintaining a steady breath and keeping a focused mental state. That could be the description of a grueling Hatha class or an extraordinarily deep meditation.

Many stop their exploration of Yoga at asana, though the lessons transposed during your practice often can’t help but extend into Life. That same habit of maintaining equilibrium in camel pose (Ustrasana) has a way of coming back to grace you in a stressful moment. When your partner doesn’t follow through on a promise, when your kids won’t listen, when a coworker challenges you. The stronger our roots, the deeper our calm, the more we can stretch to meet life’s challenges as our fullest selves and with open hearts.

The next time you’re in class and you reach the end, savor your savasana. It is in this pose that we find ourselves most within reach of the next limb. It is not the bookend of an hour, but rather the target of our asana practice. The time that BKS Iyengar described as “thoughtfully thoughtless.”

A nice perk of practicing Asana is that it makes our butt look great. There’s really no way to gloss over the fact that yoga asana is in itself a fantastic workout. It’s what gets a lot of people through the door in our society that tells us we should all have a beach bod, but doesn’t hold much regard for developing spiritual practices. What we’ve come to realize, though, is that whether or not we are working the larger Yoga Practice — the capital ‘Y’ Yoga — the Yoga has a tendency to work on us. 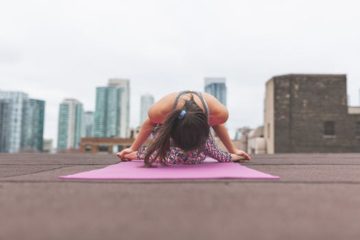 Finding the Right Yoga Mat for You

In comparison to many other practices and activities yoga requires minimal equipment. It is unique in the way that the gear is either highly personalized or completely nonexistent. A mat can be completely optional, however, Read more

According to the classical hierarchy of the eight limbs of yoga, yama and niyama encompass the initial two stages of the yogic path. Yoga asana is the third step and students of the past wouldn’t Read more

An Introduction to Yoga Nidra

“You don’t have to try to be aware, as in classic meditation. You are resting as awareness itself.” We’re thrilled to welcome Aricha P to the Sweaty Ganesh team. She brings a wealth of expertise Read more